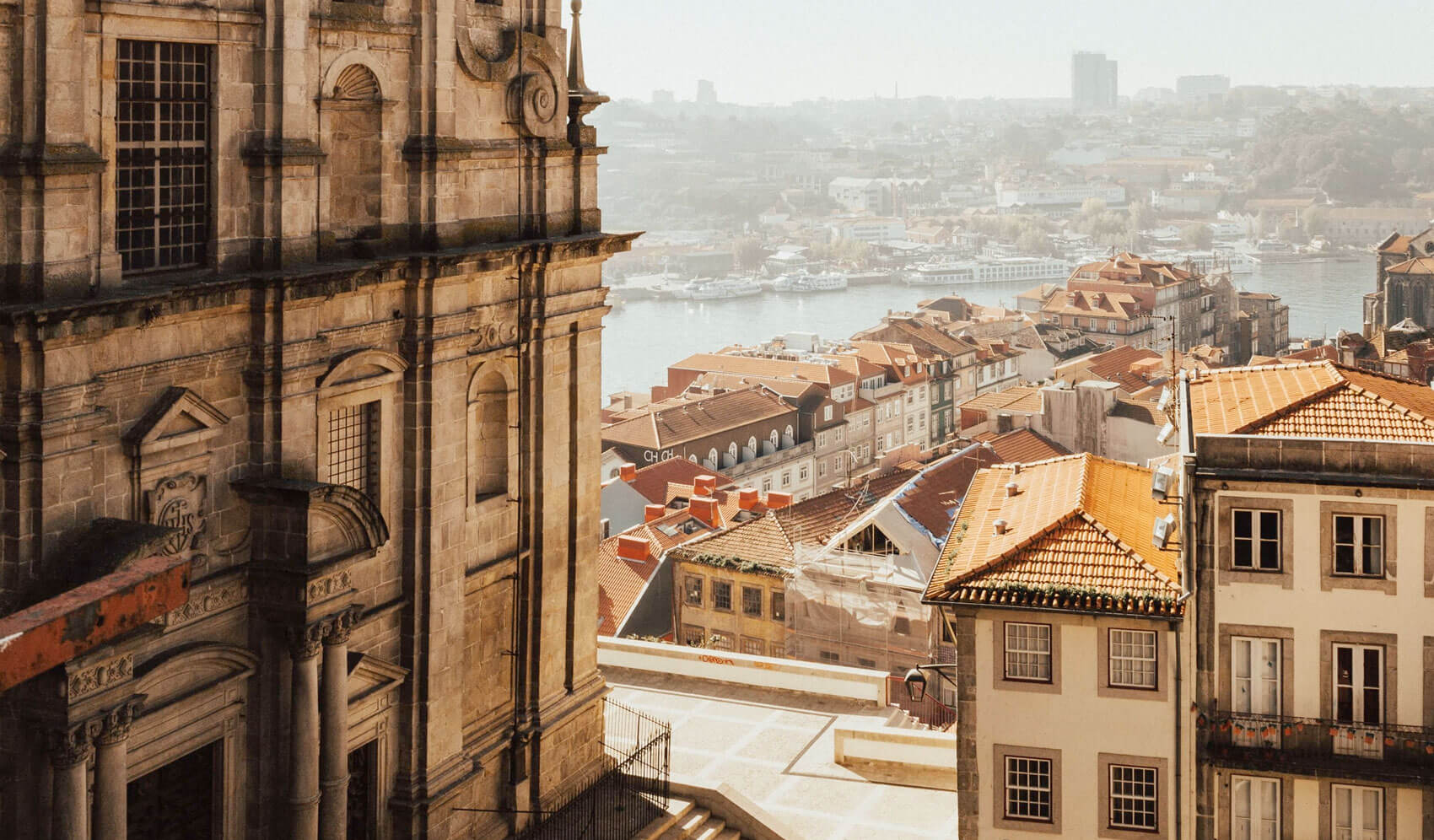 Portugal has found an antidote to right wing populism

Use Scan QR Code to copy link and share it

This article is also available in:

Considering the booming economy, dropping unemployment numbers and the return of many once-emigrated young Portuguese citizens, it seems Portugal is on the rise. Facing the policies of socialist Prime Minister António Costa, which include properly supporting the welfare state and investing in the public sector instead of austerity measures, right wing populists don’t stand a chance.

Not too long ago, Portugal stood on the brink of catastrophe: harsh austerity policies and the erosion of labour rights pushed by the conservative government lead to significant rises in poverty and unemployment. The economy dwindled due to the lack of peoples’ spending power.

Today, everything has changed:

“Nowadays, Portugal is considered a prime example among European countries: the economy is booming, unemployment is dropping and investments are rising.”

What are the reasons for this turnaround? What makes Portugal special when compared to other countries?

The first major change occurred during the general election 2015. This was time when the right wing conservative government dismantled the social welfare state piece by piece, which resulted in a furious population voicing their dissatisfaction in the voting booth – causing the conservatives to lose 11 percent of their previous electoral votes.

Lisbon’s former mayor António Costa, a socialist, won by a landslide and brought in 32 percent for the Partido Socialista after being elected frontrunner a year prior and uniting the entire city of Lisbon during his time as mayor.

At first, Portugal was said to have made a grave mistake

Costa succeeded in uniting the severely split left wing in Portugal, who now support the minority government led by him. At first, observers were pessimistic about the potential of this constellation, predicting a collapse after a few months. Moreover, both the EU and German minister of finances saw a grave mistake in the departure from austerity. „Angela Merkel described the prospect of a radical anti-austerity coalition in Portugal as “very negative”. The president of Portugal went further, calling non-conservative economic policies a “danger to national security” and attempting to keep the old government in power.

It’s been more than three years since the socialist party assumed the reins of government. Since then, scepticism of the early days has virtually vanished. The entirety of Europe seems impressed by the success story of António Costa:

The Portuguese economy has been booming for 4 years. 2017 marked the largest national economic growth of the century.

The Portuguese are not only showing the feasibility of socially conscious policies, but demonstrating the significant potential for success. 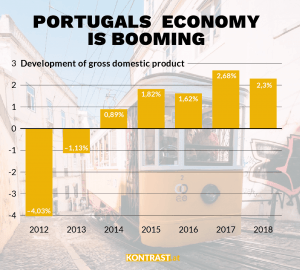 “The budget deficit has dropped to its lowest ever since the change to a democratic system in 1974 – simply because the government re-established and strengthened the social welfare state, leading to the Portuguese people having more money to spend.”

Hence, the socialists raised the once slashed wages and pensions, reintroduced paid vacations and retracted many tax raises, all while raising wealth taxes which affect only the rich parts of the population. Furthermore, the government introduced a property and real estate tax designed not to target the homes of average citizens. Costa’s socialists also put an end to the catastrophic privatizations that were once instructed by the EU and resulted in selling state assets at absurdly low prices.

“The assumption that one could save the economy by aggressively cutting wages and excessively attacking welfare programs was clearly a misconception”, Costa said about his predecessors.

Socialists at over 40 percent popularity

Portugal’s swift rise from a nation in shambles to prime example is remarkable. Costa gave hope and pride back to the people after the country was shaken to its foundation by the EU’s austerity programs and the failed previous government.

The newfound optimism is reflected by poll ratings:

The Portuguese socialists stabilized at 40 percent in popularity ratings. This makes them the most successful socialist party in Europe – something they have in common with Jeremy Corbyn and his Labour Party in the UK.

The minority government is expected to reach a result of about 60 percent in the next general election.

Costa could even gain an outright majority, meaning he doesn’t even need a political alliance any more – Portuguese electoral law allows absolute majorities under 50 percent of the total votes.

A nation without right wing populists

In the current political climate, which is full of optimism, the Right cannot get a foothold –patriotism as is claimed by the Left.

“If young Europeans are radicalized in city districts that were economically left behind, we have to answer with social policy measures”, Costa summarized his agenda in an interview with the german newspaper „Spiegel„.

Young Portuguese citizens abroad are being brought back

Nowadays, the political and economic climate under the socialist government is attractive enough to make citizens abroad consider returning to Portugal. When the conservatives were in power, tens of thousands of young citizens – some of whom were very well educated – left the country due to a lack of jobs and perspectives.

“My predecessors caused the greatest wave of emigration ever since the 1960s”, 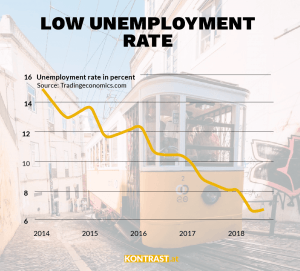 The economy crashed, almost half of the young Portuguese was unemployed – setting a sad record. Portugal was facing the risk of losing an entire generation.

By now, 2.3 million Portuguese live abroad, but the government led by Costa is set on bringing them back. “This is the only way to combat the demographic decline, revitalize our economy and securing the continued existence of our social welfare programs”, the state secretary responsible says. To ensure this, the government organized programs and created networks abroad. Additionally, temporary tax breaks for returning citizens are planned.

The high rate of unemployment among the general population hovering at 17 percent under conservative rule was reduced by a staggering 10 percent, and it continues to drop.

20 billion Euros are being invested

The remarkable economic growth of the past years is to be only the beginning. Under socialist rule, the economy grew so significantly that the money made is now set to be invested and returned to the general population. Portugal’s government plans to use the rising public sector revenue to transform the nation into a more just and modern one, after the conservatives destabilized the infrastructure.

Costa presented a nation-wide investment proposal and surprised many once again: 20 billion Euros is considered an incredible amount of money for a country the size of Portugal. 60 percent of the funds is to go towards public transportation. The remaining money will be invested in the energy sector and environmental projects.

The much-used railway line connecting Lisbon and Porto is to be modernized, urban subway networks are to be expanded and public transportation in rural areas is to be invested in. This will generate new jobs, revitalize the economy and lift public transportation onto a state-of-the-art level. Furthermore, Portugal will become more eco-sensitive in the process.

The next general election is currently set to take place in October, the opposition is trying to prevent the new investment plans insistently.

For Costa, this is about a lasting change in political climate: “This isn’t about kicking off a new campaign. It is about clearly demonstrating the importance of public investment, now that we can afford to.”

Portugal Dared to Cast Aside Austerity. It’s Having a Major Revival. Liz Alderman in the New York Times

This article is also available in:

Use Scan QR Code to copy link and share it

Portugal has found an antidote to right wing populism

Sounds like good news for Portugal. Jumping up and down shrieking „fake news!“ isn’t going to change that.

Portugal isn’t booming at all. The „great results“ aren’t really from the economy growing but from the constant growth of taxes, which are now 35% of our GDP. Let alone, Portugal economy had the smallest growth in Europe, right in front of Grecia, ONLY.

This is pure socialist propaganda and it should be marked as „fake news“.

That wasn’t the real truth… António Costa forgot to tell that in 2011 a socialist government lead us to bankruption. That at that time FMI enter in Portugal. That it was the conservative government who had to deal with FMI limited politcs for the next 4 years. And he could not do more as he was limited in his politic actions by FMI. That in 2015 the conservative party wan again the elections but without majority. And that socialist party made a comitment with left parties that permited him to govern the country. That since 2015 until now besides his… Weiterlesen »

This is BULLSHIT. Our socialist Gov is corrupt and altought they give us shitty jobs with shitty salaries they take it all again on taxes. I really hope WW3 starts soon!

This is a very misleading article. It was the richer countries of the EU like Germany and England and France who pulled them out of bankruptcy, like they did in Greece. Hopefully, they won’t return to spending without having the means.

This is a stupid comment more akin to a kindergarten child that has no understanding whatsoever about reality. Portugal was forced by a Troika to ask for a bailout, and currently is paying everything to the last dime – and the bailout was imposed with very high interest rates from German and French banks, there was no handover you idiot. This caused unemployment to soar to 17% (!!), families destroyed, and overall a very dangerous social situation, which Portugal was able to take back under control. Ironically, France today is a joke of a country, with terrorism, strikes every day,… Weiterlesen »

Such a bullshit article

Agree, Portugal is for sure not booming because of socialist party. The reason is just the opposite. Deregulation of housing market 2013 with the result of massive investments in real estate. Zero tax NHR regime have attracted people from all around the world since 2009. Portugal is working hard with benefits to attract organisations like EMSA and tech companises like Google, Microsoft, etc.

Lol – Portugal was saved by a MASSIVE input of EU capital, not by the current government. This article is so biased one cannot call this journalism.

I think you can not even review all the facts for the simple reason that you don’t make any sense in terms of macroeconomics. You don’t know what you talking about I wonder why did you wrote this.

Don’t think you understand what makes sense in terms of macroeconomics. Turns out Keynes was right; you create jobs by stimulating demand, not by reducing it. Throw lots of people out of work and they don’t buy anything; it doesn’t matter how „confident“ the private sector is because of your spending reductions, they can’t sell to people who don’t have the money to buy.

Oh boy. Sounds like you took one economics class and concluded Keynes was right. Keynes argued that it hardly mattered where the money went, so long as it was pumped into the economy. He believed the long run effects simply didn’t exist in most cases, making huge arguments for short term gains. What you are seeing in portugal are those short term gains. You therefor CANNOT conclude that „Keynes was right“ about there being no long term negative effects from it by simply looking at the short term gains. That’s completely dishonest and you know it. Right now we are… Weiterlesen »

Dear Von,
I strongly recommend that you review all facts, numbers and opinions you use to support these affirmations. Otherwise, This article is just fake news which cannot be accepted as journalism.

Send this to a friend